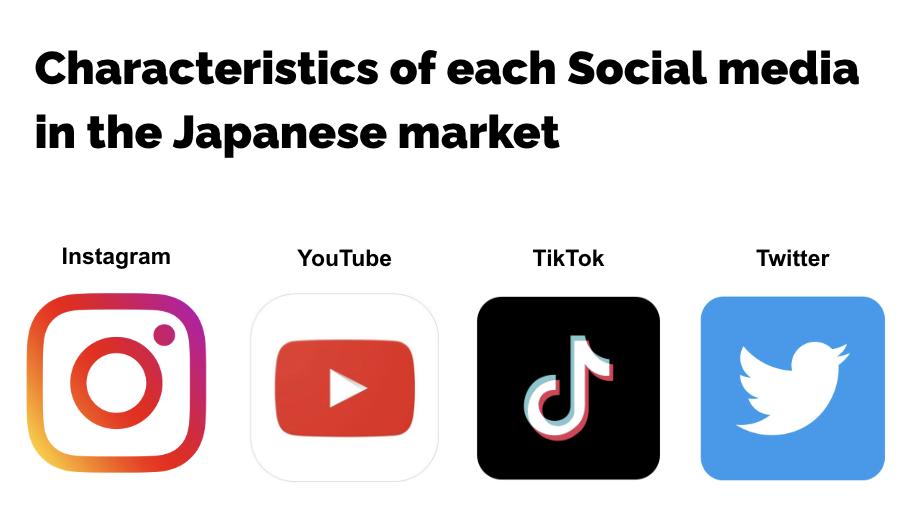 Characteristics of each Social media in the Japanese market

Characteristics of each Social media in the Japanese market

First, let's take a quick look at the basic demographics of Japan.

Japan's population in the year of 2022 is approximately 125.7 million.


In particular, the population between the ages of 15 and 64 is 74.2 million, indicating that the number of smartphone users can be expected to be about the same, about 74 million people.

Secondly, w would like to briefly introduce the unique users and characteristics of each SNS platform in Japan.


The following patterns can be seen in how users in Japan approach YouTube.

① Use as a research and learning tool

In Japan, channels featuring children of elementary school age and younger have a relatively large number of followers. The reason lies behind the fact that many parents with small children use these videos to entertain their kids when they cry, as these videos help them stop crying.

Due to the influence of Corona virus, many famous comedians have opened YouTube channels, which quickly rising the number of their followers.


In addition, the game Minecraft is being used by elementary school students to learn programming, and videos of Minecraft in action tend to be popular.

For cosmetics and gadgets, consumers tend to check reviews on YouTube before making purchases.


Therefore, channels that are transparent about the pros and cons of their products in their videos tend to have a large number of followers due to their high level of trust.

There are slightly more female users, and many of them seem to be making good use of the site.

In Japan, the term "Insta-ei" became popular some time ago. To be specific, Instagram was originally perceived as a place to upload stylish and beautiful photos, but since then Instagram's algorithm has changed, and it is now transforming into an information gathering platform.


In the past, "likes" and "comments" were indicators for generating buzz; however, "save" is now an important indicator, and more and more information is being posted that can be saved. Therefore, the platform has changed to a platform where people save the information or posts regarding their favorite products, such as fashion, nail art, and cosmetics, when they find them, and collect them.

40% of users are in their 20s or younger, and they also use Twitter as a search tool.


However, compared to other social media, influencers tend to be less present.

The recent acquisition of Twitter by Elon Musk may change the way it had been used and perceived, with changes in future functions, etc., so it will be interesting to see how it is going to be utilized.

Currenly, 60% of users are in their 20s or younger, but the number of users in their 30s or older is increasing every year, and the age demographic is expected to change over the next few years.


The purpose of use has remained unchanged since the beginning, with users using TikTok to kill time being number one. However, as the age of users increases, the number of information-providing accounts is also expected to increase.

Many books have been published on the business use of TikTok, and operation as a corporate account is still a blue ocean.